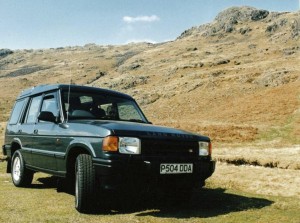 This was bought from Stafford Land Rover at the tail-end of 1999. I really loved this Land Rover (I suppose it was because it was my first). It was certainly a step up from my Escort estate! The only thing I did to this one was fit a map light and fire extinguisher, hardly hardcore eh?

I did many happy miles in this LR and the only thing I had to do other than regular servicing was to replace two tyres on the back axle and get the earth strap to the chassis renewed.
The only other issues I had with this one were corrosion on some of the panels and the continually squealing serpentine drive belt that drove me mad.

This was eventually part-exchanged against the Td5 Discovery in the early part of 2002.