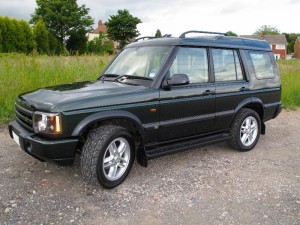 After much deliberation I decided that as much as I liked the Defender it just wasn’t quite right as the ‘family wagon’. We tend to use the Land Rover mainly for days out at the weekend and holidays, which usually involve, because of the places we like to go, a fair old drive. For me sat up front driving it wasn’t such a chore, but for my wife and kids, the rear seats in a Defender are no place to spend a great deal of time and expect much in the way of comfort. Also with no air conditioning, long drives in hot weather with windows down and bulkhead flaps open can become rather tiresome!
I did consider replacing the rear seats with some aftermarket high-back versions and even possibly retro-fitting air conditioning, but it was never really going to be financially viable.
After alot of pondering I finally decided to try and sell the Defender. This proved easier than I expected, so now the hunt was on for a Disco!
Three weeks later after a lot of time spent browsing the internet, small ads and local specialist dealers I finally found what seemed to be the ‘ideal’ specification for my needs.
The ‘Landmark’ edition seems to fall somewhere between the ‘ES’ top spec and the mid-range ‘GS’ specification. This seemed ideal for what I expected of the Land Rover.
It came with a full service history, 51000 miles on the clock, one owner from new, registered on a ’54 plate and the icing on the cake…. in my favourite Land Rover colour, Epsom Green!

Which is just as well given the name of this site…? 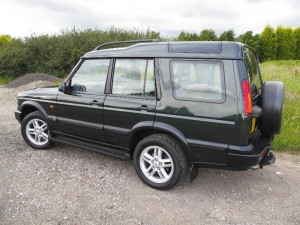 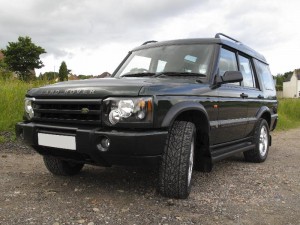 Modifications to this one will probably be a bit more conservative than the type of plans I had for the Defender. Firstly I’d like to remove the side steps to improve it’s ‘break-over’ angle when being used off-road, and also replace the current tow bar (commonly known as the ‘Land Rover plough’) with a North American Spec. (NAS) type receiver hitch. Incidentally, if anyone knows of a UK supplier for these types of hitches, let me know please!
I’ll post up some more photographs when I get a chance to have a good play with it.