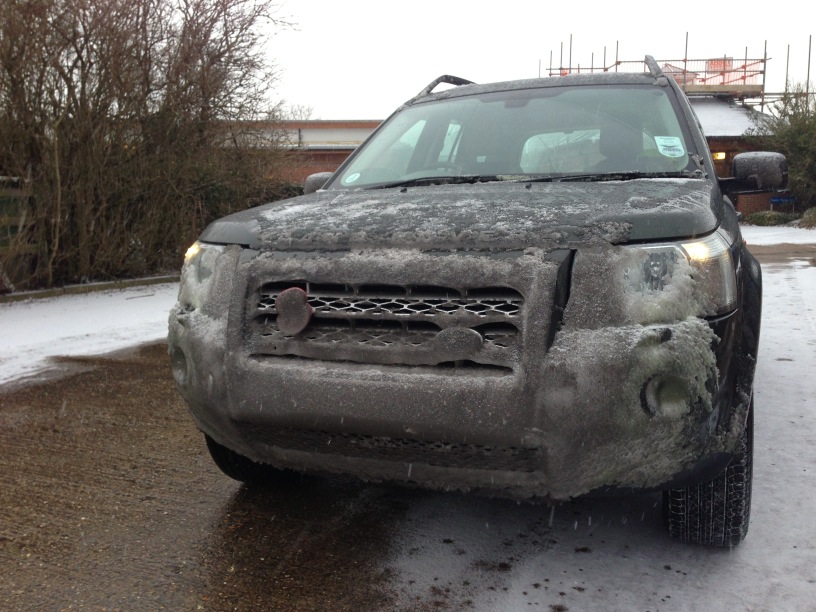 Yesterday I had to take our hairy beast to Queen’s Veterinary School Hospital in Cambridge for treatment for an ongoing condition. This was the 3rd of 4 visits and so far the trip there had been reasonably smooth, taking just under 2 hours. However due to the weather conditions yesterday, it took a little longer!

My route was to be M5 -> M6 -> A14 -> M11. The A roads around Stourbridge weren’t particularly clear and it took me neary 45 minutes to reach the M5. I couldn’t get to J3, my usual route, due to traffic queues so headed for J4. Whilst travelling down the A491, most vehicles were in lane 1 of the dual carriageway due to the snow in lane 2. Having the Freelander enabled me to safely overtake the slower moving traffic. This included an Evoque which eventually plucked up the courage to follow me!

Once on the M5 it was slow going as most drivers were only using lanes 1 and 2. Again I was able to use lane 3 when safe to do so. What struck me was the amount of drivers that stayed in lane 2 when they could have nipped into lane 1 and let faster moving traffic past them. Giving them the benefit of the doubt, I figured it was due to their lack of snow driving experience and not that they were selfish morons with no regard to other road users. I was also astounded by the speeds and crazy manoeuvres carried out by truck drivers. I tend to give them a wide berth as I’ve had some narrow scrapes with trucks pulling out on me including one driver who pulled right across the chevrons where the M6 south joins the traffic coming in from the M42 and toll road. These guys are supposed to be professional drivers!

The journey there was quite stressful as it was a mixture of trying to make progress to meet our appointment and avoiding the drivers not driving to the conditions! We got to the hospital with 10 minutes to spare so there was time for beasty to have a wee before getting his treatment. Whilst he was being treated I nipped into Cambridge to fill up with diesel at the Shell garage close to King’s College. It was as this point I noticed how iced up the front of the vehicle was: –

Upon my return he was just coming around and we were able to be off by 3 o’clock.

The journey back was less fraught as we had no time deadlines to meet. The weather around Cambridge was slightly better than around Birmingham and we made good progress.

Decided to come back via the M42 rather tham M6 -> M5 and it was a good decision! As soon as we got across the junction I could see the line of red lights going up to Birmingham on the M6. The M42, by contrast, flowed smoothly and after J3A was virtually empty. The rest of the trip home was uneventful!

On the whole I was pleased with the Freelander’s performance. I felt safe in traffic and confident to manoeuvre in the snow. The only downside were the aero wiper blades which build up with ice progressively. This impaired the clearing performance of the blades leading to a smudged dirty screen. I tried using the blower  and the heated screen to clear the ice but with little effect.

I’m hoping our final trip to Cambridge next Friday will be less eventful!