Well I’ve just about recovered from walking around the LRO Show at Peterborough in the sun of all things, can you believe it, sun in the summer !
We did plenty of mooching around and a little bit of spending (shh…don’t tell the wife) but I still didn’t manage to get everything I’d have liked to have got. There were a few companies notable by their absence that I was hoping would be there, namely QT, Mudstuff and Difflock to name a few. I could have spent even more if they’d have been there ! The general trend at these shows lately though seems to be several companies on one stand, I suppose it’s all down to the cost of ground space.
Here’s a picture of my ‘swag’ 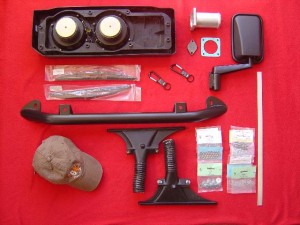 Plenty of stainless steel fixings, bit of ally bar, light-bar, subwoofer from a Disco II, new wipers, some screen vents to ‘experiment’ with, EGR bypass kit, wing mirror and a hat (no cuddly toy though).
That should keep me busy for a bit, picture’s as and when the fitting start’s.