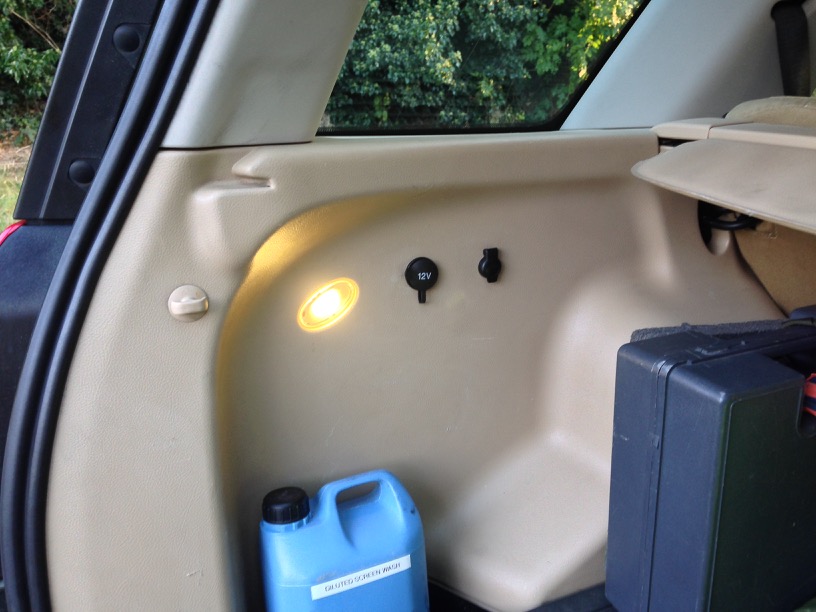 I’ve wanted a power socket in the boot since I’ve owned my current Freelander. I’ve had one in all the previous Freelanders I’ve owned. I generally use them for powering my coolbox but have used it for powering a small compressor for pumping up tyres.

Not long after I bought the current Freelander, I had to take it in for some warranty work. They gave me a courtesy car and this had a the auxiliary power socket fitted in the boot.
[su_spacer]After some investigation it appeared as though there was no retrofit kit like for the Freelander 1. I examined the wiring diagram and it looked like there was a a fuse location provided for the rear socket.

Fuse FB10 seemed to be the fuse to use. With this in mind I set about getting to the wiring. The offside rear trim panel and boot floor were removed and I checked the rear fuse box. This fuse wasn’t fitted but even worse there was no outgoing fuse receptacle (i.e. everything to the right of FB10 above was missing. This seems to be the case for 2007MY Freelanders.

To get around this I manage to extract fuse receptacles from another unused position in the rear fuse box. A suitable wire was crimped to this terminal and the terminal inserted into the output position of FB10.

The trim panel was then removed and drilled to take the Standard Land Rover power socket LR007412 (previously YXW500030PVJ) and a DIN socket. I also added a DIN socket with a spring loaded cover. They are a better connection than the standard ‘Cigar Lighter’ type. My cool box has a DIN plug fitted. I think I picked the DIN sockets at a Land Rover show for a couple of quid each.

I didn’t put my sockets in the standard location. I think are more easily accessed where I have put them. I the standard location the are difficult to get to if the boot is full. I always unplug the cool box when I leave the car as the sockets are permanently wired and would drain the battery.

The sockets were then wired to the fused output and everything was re-assembled.

The whole process took me an afternoon to carry out.