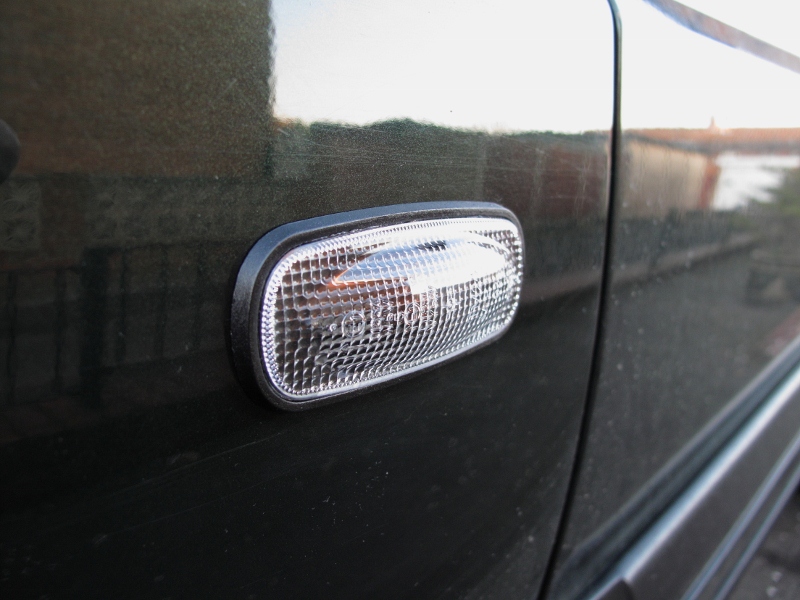 Over the last few years there has seemingly been a trend within the motor industry to use light clusters that do away with the traditional red and orange coloured lenses in the light cluster and replace them with a coloured bulb instead so that the light unit appears a uniform silver in colour only showing the relevant colour when the bulb is illuminated. This has lead to the availability of clear indicator and light clusters as both genuine and after-market ‘upgrades’, something which has never really caught my attention up until recently when I stumbled upon some genuine clear side repeaters for sale on one of the stalls at the Malvern 4×4 autojumble for less than half of the usual price, well it would be rude not to…

Removing the side repeaters is very easy, you simply push the repeater over to one side and then ‘pop’ the other end out of it’s recess in the wing, squeeze the sides of the electrical plug to release the locking tab then pull on the plug (not the wires) to release the connector from the repeater. Simplicity itself!

I must be honest, I’m not entirely sure that I like the new look at the moment, maybe it’ll grow on me in time. I’ll leave them in place for a while and see how I feel about them in a few weeks or so, I’m so glad I got them cheap!
Maybe Land Rover got it right in the first place, my discovery is coming up to being 8 years old so maybe this is a bit like trying to modernise something that doesn’t actually need  modernising, why change something for the sake of it? I guess time will tell.